NEWS ANALYSIS: Employers across the U.S. spoke out about the pending proposed Affordable Care Act (ACA) with concerns with it and it seems the government is listening. Now, employers will no longer be required to provide health care coverage to employees starting January 1, 2014, as part of the ACA. Small business owners are praising this postponement.

August 2013: Employer Health Care Mandate Postponed
It was announced that the government has postponed the Patient Protection and Affordable Care Act’s (PPAC) mandatory employer and insurer reporting requirements for one year. As a result, the administration also announced that it will waive the imposition of any employer-shared responsibility penalty payments for 2014. This effectively means that employers with more than 50 employees will not be required to provide health insurance to their employees or face a penalty until 2015. The Treasury Department announcement recognized that, for many employers and insurers otherwise subject to these “employer and insurer mandates,” the rules for compliance are just too complex for implementation by 2014.
In its announcement, the administration promised to publish formal guidance shortly that will describe the transition that will be taking place from mandatory 2014 reporting to a voluntary system for 2014. It also expects to publish revised information reporting rules for insurers, self-insuring employers, and other parties that provide health care coverage some time during the summer. The administration is encouraging employers that now provide health insurance to voluntarily implement information reporting under these revised rules in order to test their systems before mandatory reporting comes into force in 2015.
The announcement did not address the individual mandate that goes into effect in 2014 and requires most individuals to obtain health insurance or pay a penalty. Nor does it apparently delay implementation of marketplace exchanges.

We are always proud when we can thank one of our employees for exceptional work – Sara we are proud of you.

Thank you for such an excellent job!

Thank you to David Hicks & Residence Life at ASU! Y’all sure made a girl feel special today! We have the greatest customers ever at Northeast Arkansas Glass, Ditta Door & Hardware & Overhead Door Company of NEA! 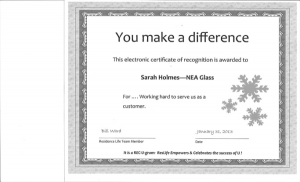